A Unique Place with a Long History

A Brief History of Our Area

As far as we know, the first residents of the Waterdown area were Algonquin-speaking Aboriginal Peoples who arrived on the lands at the west end of Lake Ontario as early as 7,500 BC. Rich in fish, game and fertile soils (and with excellent viewpoints to the surrounding area). First Nations Peoples continuously occupied the Waterdown/Flamborough area until the arrival of European settlers. In the Photo Gallery below we can see clear evidence of the long occupation of First Nations Peoples in our area. These are images of a portion of the stone artifacts collected over the past 40 years by a local West Flamborough resident. This private collection of 100's ofstone tools (spearheads, arrowheads, drills, grain milling tools, hide working and wood working tools) was collected over several years in a small area of agricultural land in West Flamborough (just a few kilometers west of the village of Waterdown). By 1653, diseases introduced by the Europeans and war, had reduced the native population to zero in our area.

Running west from Queenston, a twisting line of limestone cliffs hugs the southern shore and western end of Lake Ontario and then swings north up the Bruce Peninsula to Tobermory. This rocky spine of Southern Ontario is now called the Niagara Escarpment. The idea of a public access walking trail along the entire length of the escarpment was born in 1960. The Bruce Trail was officially opened in 1967, and through the diligence of volunteers and the generous support of land owners, the trail secures the public use of more land every year. The Great Falls in Waterdown (shown below) is one of the most popular sections of the trail. 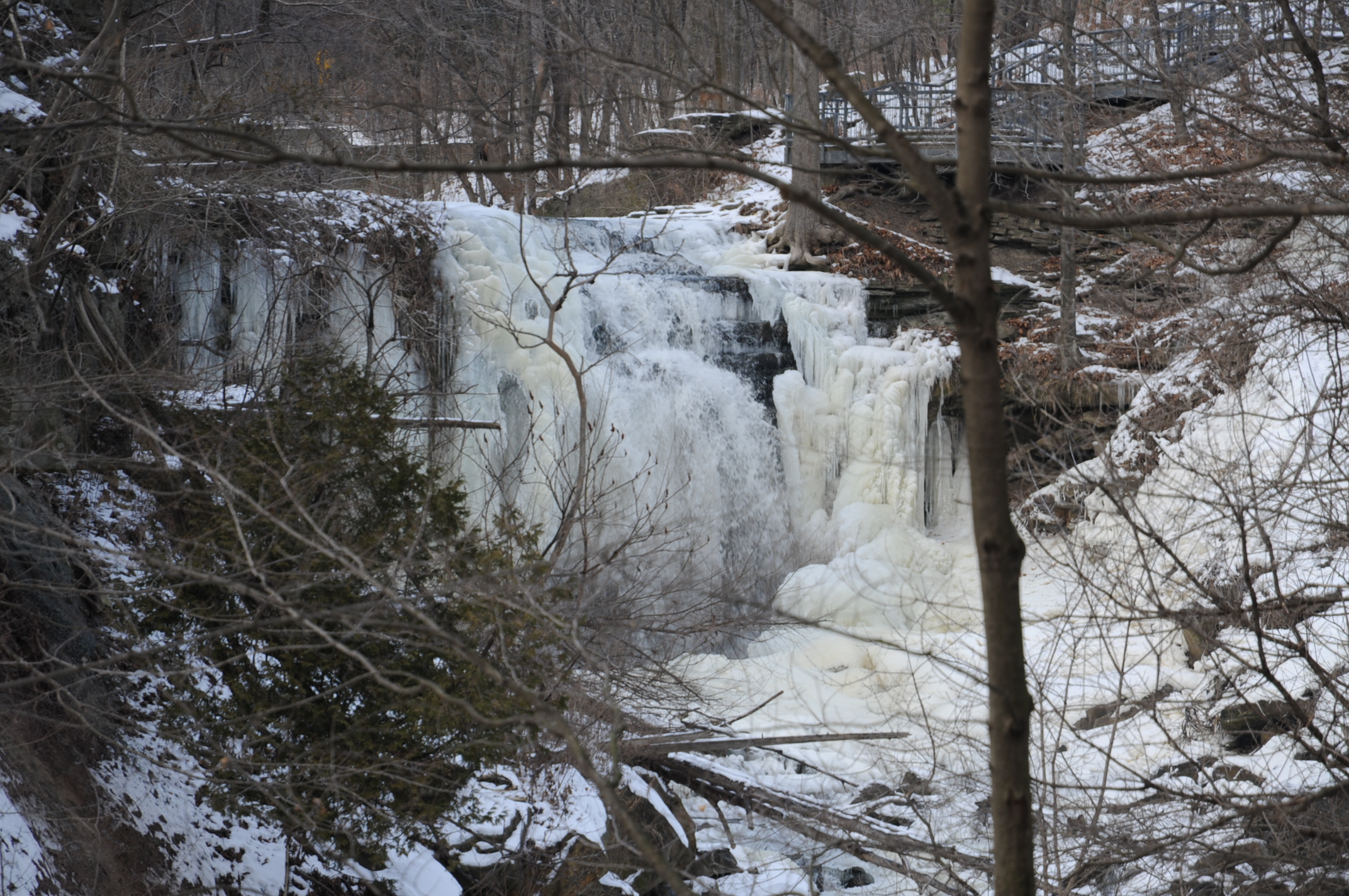 The (up to 200 foot) drop at the escarpment cliff face has created hundreds of waterfalls where dozens of creeks and rivers tumble down into the big lake.The energy released by all of that falling water began to fuel the Southern Ontario economy in the early 1700’s. Recently upgraded, the hydro-electric plants at nearby Niagara Falls produce over 2.4 million kilowatts of electricity daily.

Southern Ontario was almost completely logged out by the European settlers who arrived here in the 1800's. The milling of the trees from the virgin Carolinian Forests of our area was partly accomplished right here in Smokey Hollow below the village of Waterdown. Many of the Buildings in our Heritage District date back to the mid-1800's when over a dozen water-powered Smokey Hollow Mills captured the energy of Grindstone Creek flowing over the escarpment, thereby fueling Waterdown's first local building boom.

The Oldest Living Residents of our area

The white cedars of the escarpment cliff face escaped the lumberjack's ax only because they were too small, too twisted with old age, or just too hard to reach. In the 1800's almost every tree in the southern half of the province of Ontario was felled and fashioned into lumber, or split to make the rail fences used to separate the new settlers farms. As of today, less that .02% of the trees in southern Ontario are over 150 years old; and most of these "old trees" are second growth trees that escaped being logged out a second time because private land owners valued them, or they were captured within small parcels of land which eventually became parks.

So, just how old are the cedar trees clinging to life on the face of The Niagara Escarpment? The following images were scanned from the book 'The Last Stand,  A Journey Through The Ancient Cliff-Face Forest of the Niagara Escarpment' by Peter E. Kelly and Douglas W. Larson (published in 2007 by Natural Heritage Books). This beautifully written book is highly recommended reading for those interested in the unique geology and ecology of our area - and the pictures are also stunning.  Click on an image below - the caption reveals how old each tree is.

The first European claims on our area were made by the French. As such, the colonial history of our area began as part of a vast inland territory called Canada within the immense French colony of New France.

After the fall of New France in 1759 the region changed dramatically. The Anishinabe forged an alliance with the British Crown that was reaffirmed by King George III's Royal Proclamation of 1763. Politically, the region became part of the Province of Quebec that was created by the British. The area remained largely unaffected until the American Revolution unleashed a flood of Loyalists fleeing the American republic. Access was largely restricted to water, so the first settlements were along the coast of Lake Ontario. To facilitate the English-speaking settlers, the Province of Quebec was broken into Upper and Lower Canada with Lieutenant Governor John Graves Simcoe as the first representative of the Crown for Upper Canada.

It was Simcoe whilewalking along the beach strip of Hamilton who looked up at the escarpment and named its northern arm around Burlington Bay "Flamborough" because it reminded him of Flamborough Head in Yorkshire, England. The Flamborough area was ceded to the Crown by treaty with the Anishinabe on May 22, 1784. The outline of the new township was laid out by John Collins in 1790 with further surveys conducted through to 1797. Originally meant to be the Township of Flamborough, it was broken into the separate entities of East Flamborough and West Flamborough in 1798. Today Waterdown is the largest settlement in the former township of East Flamborough. 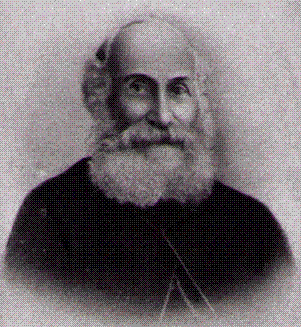 Alexander Brown acquired 800 acres of land from the crown in 1802. He built the first log cabin and water-powered sawmill at the top of The Great Falls (shown above in winter). The 10 meter (33 foot) cascade marks the start of where Grindstone Creek cuts its way down through the escarpment face on its journey to Lake Ontario. Literally dozens of grist and lumber mills would soon follow Mr. Brown’s example. Within a generation, the deep gully where the creek makes its way down to the lake would become so crowded with water-powered industry, it became known as Smokey Hollow.

In the Google Earth Map below we show the area of Waterdown where theMill Street Heritage District properties are located. The area includes dozens of homes and businesses constructed in the late 1800's clustered near the intersection of Dundas Street and Mill Streets (North and South). 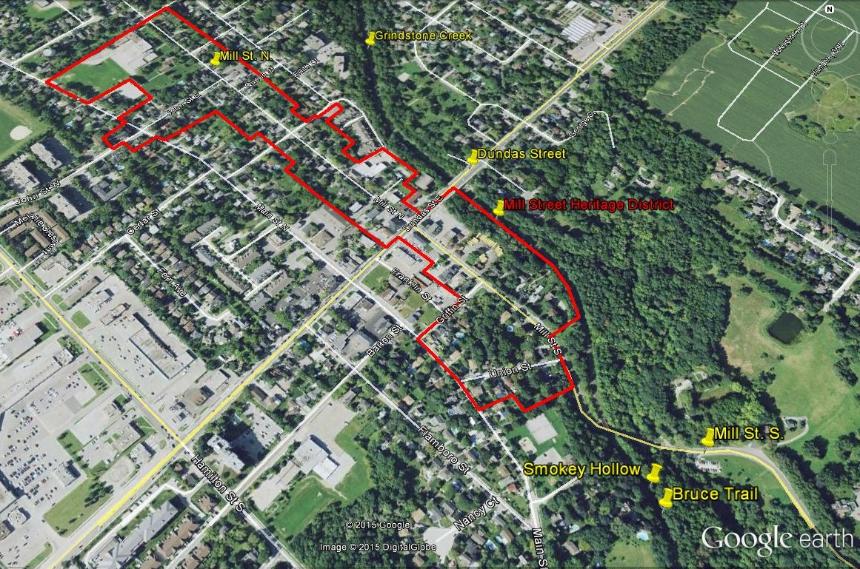 The Amalgamated City of Hamilton

Waterdown goes through major changes in 2001 The following is excerpted from Wikipedia.com: On January 1, 2001, the new city of Hamilton was formed from the amalgamation of Hamilton and its five neighbouring municipalities: Ancaster,Dundas, Flamborough, Glanbrook and Stoney Creek.

Before amalgamation, the "old" City of Hamilton had 331,121 Hamiltonians divided into 100 neighborhoods. The former region of Hamilton-Wentworth had a population of 490,268. The amalgamation created a single-tier municipal government ending subsidization of its suburbs. The new amalgamated city has 519,949 people in over 100 old neighborhoods, and surrounding communities.